The Mid-Year Economic Briefing: Positioning in the Economy of the 10-Point Duterte Agenda

The Mid-Year Economic Briefing: Positioning in the Economy of the 10-Point Duterte Agenda 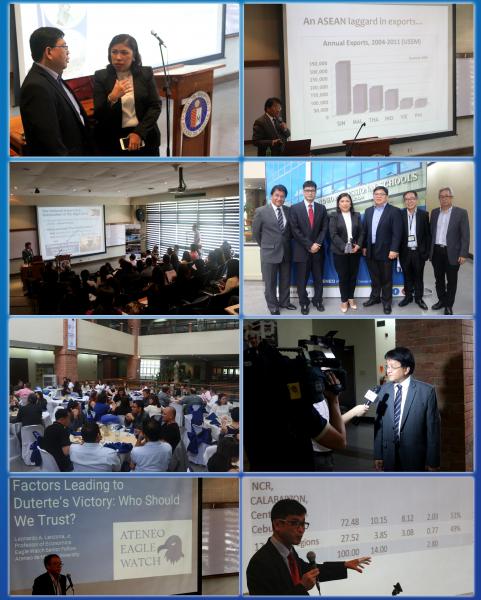 Weeks after President Rodrigo Duterte delivered his State of the Nation Address (SONA) last July 25, senior economists from the Ateneo Center for Economic Research and Development (ACERD) drew a packed crowd at the Amphitheater of the Ateneo Professional Schools Rockwell campus in Makati City on August 18, 2016, to talk about the positioning and challenges of the 10-Point Duterte Agenda.

The Mid-Year Economic Briefing: Positioning in the Economy of the 10-Point Duterte Agenda was organized by the Ateneo Graduate School of Business-Center for Continuing Education and Ateneo Center for Economic Research and Development. The event featured Dr. Cielito Habito, Dr. Leonardo Lanzona, and Dr. Luis Dumlao.

Dr. Habito gave his assessment using the” PiTiK (Presyo- Trabaho- Kita) Test”.  In terms of prices, inflation rate, he said, is low - averaging 1.3% in 2016.  Unemployment rate finally broke 6% barrier averaging over 5.9% on the last three quarters of 2015. The country’s Gross Domestic Product (GDP) growth of 6.3% in the last quarter of 2015 and 6.9% in the first quarter of 2016, Habito said.  Dr. Leonardo Lanzona presented the factors that lead Duterte’s victory. On the other hand, Dr. Luis Dumlao discussed the economic assumption, forecasts in the first year of Duterte, and the federalism effect in the Philippines.